An Epidemic of White Death: A Canary in the Coal Mine? 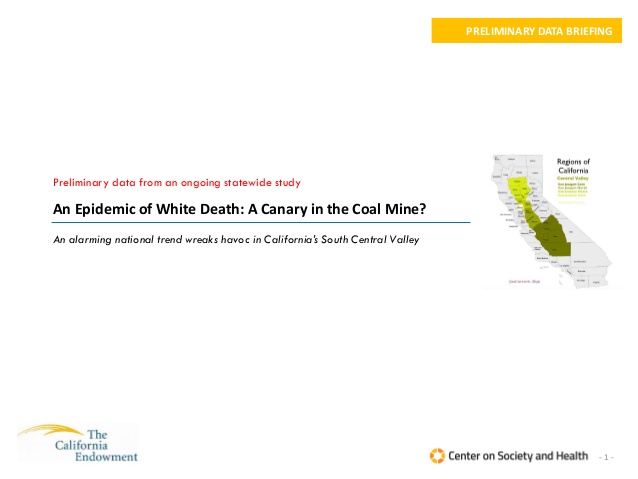 Jan 18 An Epidemic of White Death: A Canary in the Coal Mine?

According to preliminary data from an ongoing new health study, reducing access to health care or weakening the health care safety net could have severe consequences for the Central San Joaquin Valley of California. This is a region that already suffers from high unemployment, deep poverty and skyrocketing drug use…and surprisingly, the white population may be uniquely vulnerable in this region.

Working in partnership with The California Endowment, the Center on Society and Health at Virginia Commonwealth University, reports an unprecedented surge in the death rate for middle-aged whites living in this region (Kern, Fresno, Tulare, and Kings counties). Over the past 20 years across California, death rates among Black, Hispanic, and Asian adults ages 40-64 years have fallen by 16-20 percent. Among California Whites, however, they have decreased by only 5 percent. In this same 20-year period in this four-county region of the Southern San Joaquin Valley, white death rates have actually increased by 11 percent!

This ongoing study comes in the wake of national reports that show a worrying decline in life expectancy in the U.S.

“Many Americans are really struggling to find opportunity in this new economy. In some regions of the country, a lot of people are losing hope, and turning to alcohol, drugs, and even suicide,” said Dr. Tony Iton, Senior Vice President with The California Endowment. “In the wake of these findings, this is the worst possible time to reduce access to health care or any health care safety net programs. Rather than dismantling our already fragile social compact, we need to be strengthening it so that all people have a meaningful shot at opportunity and good health.”

The new death rate data suggests that Whites in Kern and Tulare counties would be particularly vulnerable to reductions in health care access, but all rural communities in the Central Valley would suffer greatly, where Medi-Cal now serves close to half of all residents. Not surprisingly, Medi-Cal’s expansion was the heaviest in the state’s rural counties, where most of the low-income residents live. Specifically, Tulare County had the state’s highest level of Medi-Cal enrollment.

In addition to the weak economy that strangles the above counties, Steven Woolf, one of the lead authors of the report, cites other factors for the increase in death rate among whites.

“Household incomes have been stagnant and poverty rates have been climbing in these counties over a period of many years,” he said. “Stress, anxiety and depression are taking their toll on this population. The economy is literally costing lives.”

In addition to exposing this fact and alerting Californians, The California Endowment is also launching a new effort to protect the health, safety and wellness of all residents. Beginning this month, the #Fight4All Initiative will invest more than $25 million over three years in a variety of ways to improve health outcomes and build healthy communities throughout California.

“We believe California is stronger when we stand as one and work together to reweave our tattered social compact. Access to high quality affordable healthcare is a crucial cornerstone of that social compact,” Iton said. “For too many Californians, the odds are that our zip codes are more important than our genetic codes when it comes to our health. We think it is time to change those odds.”